Be a surgeon for a day!

Well, sort of. Abrazo Community Health Network opened up its Scottsale campus operating rooms to give you a hands-on look at how their robotics equipment works. Need a new hip? Maybe a knee? Don't ask Dr. Hech.

SUN CITY, GEORGETOWN Texas – So what if there was a new, minimally invasive hip replacement procedure that promises to get patients up and walking within a day or two, instead of weeks or months? It’s true, and it’s all done from the inside out.

Robotics – Surgery for the 21st Century

MINNEAPOLIS (WCCO) – A significantly shorter recovery time and a less invasive procedure are some of the perks of the new SuperPATH hip replacement surgery.

PHOENIX – Bill Lammers is a champion shot-put and discus thrower but he’s in his 60s and also knows those sports take a toll on your body.

Hip replacement surgery has taken a new “super path” with the advent of a micro-invasive technique that allows patients to experience dramatically accelerated recovery, with minimal pain. Most patients pack up and head home from the hospital within 24 hours after surgery.

MT. VERNON – Steve Harrison is usually on the sidelines at Mt. Vernon Township High School calling the shots at the soccer coach there.

Monday though, he found himself at St. Mary’s Good Samaritan Hospital–preparing for hip replacement surgery. He says years of arthritis have finally caught up with him.

Doctor Jimmy Chow says he can help that. He and his colleagues at the Orthopaedic Center of Southern Illinois are using a new hybrid approach.

Chow has performed about 100 of these minimally invasive hip replacements in Mt. Vernon.

“The big advantage is because the muscle on the front and back are not addressed or not touched. It means you don’t have to wait for the muscle to heal while you’re recovering. That decreases the risk for dislocation,” said Dr. Chow.

He says it also helps speed up recovery time. On June 15th, Kelly Wang of Carmi had his right hip replaced. Monday morning, he underwent the procedure for a new left hip.

“Back to real life. Been on crutches for a year. Amazing everything you take for granted.”

“In our practice, we’re already seeing in this area patients going back to bowling, back to golf, back to hunting, back to drag racing. All of those things within the first month of surgery.”

Steve was up and walking around just hours after the surgery. Now he’s looking forward to hitting the field again.

“The recovery time was the crucial part. I didn’t want to be laid up for six weeks. Sounds like they’re going to get me rolling again real quick.”

Doctor Chow says this new approach should be more widely used by November.

MT. VERNON – A new technologically advanced surgical procedure designed to extend the life of knee implants was performed for the first time in this area Wednesday at St. Mary’s Good Samaritan Hospital.

Dr. Jimmy Chow, of the Orthopaedic Center of Southern Illinois in Mt. Vernon, is using new technology, VISIONAIRE Patient Match, that “uses a patient’s MRI and X-ray images to design and build surgical instruments customized for his or her unique knee anatomy.” 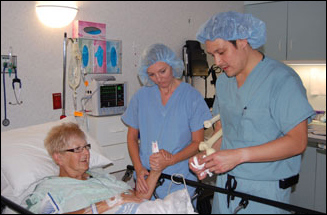 The new technology enables Chow to begin the surgical process before the patient is ever admitted. The surgical instruments, “engineered exclusively for that patient’s knee,” are made off-site, Chow explained, and are designed off the MRI photographs taken of the patient’s hip, knee and ankles.

According to information from SMGS, “while every person’s knee joint has subtle differences in shape and contour, traditional surgical instruments used to place knee implants are one-size-fits-all. In the past, an orthopedic surgeon would spend time during the procedure adapting to a knee’s ‘terrain’ in order to achieve the proper placement of the implant.”

“Now we’ve taken the computer out of the operating room because the surgery is now planned ahead of time,” Chow said. 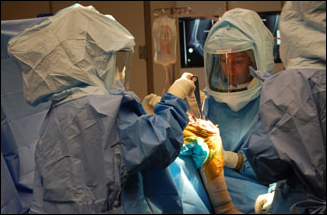 The new technology eliminates several steps from the traditional surgery, which, in turn, reduces the operating time – meaning less blood loss and decreased time under anesthesia and a decreased hospital stay for patients.

While the traditional knee surgery typically lasts an hour and a half, Chow said he anticipated the technology will eventually begin to make an impact in his own operating room.

“This is the first time we have done this, so as we do more and more of these, it will take less and less time,” he said. “Every minute is precious in the [operating room.]”

Currently, Chow explained, the procedure is covered under most insurance carriers, but Medicare does not cover it. Any Medicare patient would be required to pay out of his or her own pocket.

“It’s really too bad, but that’s the way things are going right now,” he said. “Really, because the procedure decreases operating times, it also decreases the costs and improves the patient’s outcome, which is the bottom line.”

It is not only Chow who will be performing the surgery at St. Mary’s Good Samaritan, but the other orthopedic surgeons as well.

“The procedure is not something that is exclusive to me,” Chow said. “It will be done by the entire office.”